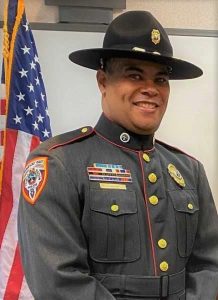 In 2001, he was recruited by the Bureau of Indian Affairs, Office of Justice Services (BIA-OJS) and became the first member of a North Eastern Tribe with BIA-OJS and appointed as a Supervisory Police Officer and Training Sergeant at the US Indian Police Academy.  In 2003, Chief Brooks returned briefly to the Mashantucket Tribal Nation Police Department in the position of Detective Sergeant.

In 2009 while serving as the Chief of Police at the Wind River Agency in Wyoming Chief Brooks spearheaded the efforts in a Reduction of Violent Crime in Indian Country initiative called Operation Alliance and Operation Endeavor under President Obamas administration. As part of those efforts Chief Brooks received the prestigious US Attorney Generals Award for Exceptional Service to Indian Country.