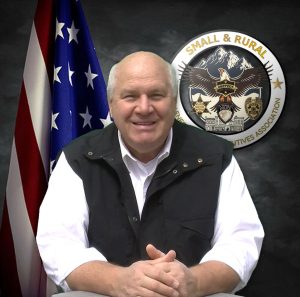 Before signing on as the Executive Director for SRLEEA, Bill was an Air Force Meteorologist turned award-winning television producer and CEO of Avant-Garde Productions. Bill’s company produces the oldest outdoor television show in America – American Outdoors. They also produce First Responder-TV which Bill hosts and reports for.

Bill and his company provide regular coverage of the IACP Conference and the Shot Show which are both held annually. Bill has made appearances on CBS Morning News, MTV, The Outdoor Channel, Motor Trend Television, The Culinary Channel, The Geekery View, HGTV, PBS, The Weather Channel and numerous local television stations across the nation on behalf of his shows.

In addition to writing scripts and hosting in the field, Bill also oversees all production and negotiations on behalf of his studio, for his company’s shows and the distributors. This includes ensuring all episodes are completed on time, within budget, and to agreed artistic and technical standards. In addition to the many challenges of the front office, sometimes Bill’s duties include diving in 32 degree glacial waters with American Outdoors, hunting record whitetail deer in sub-freezing weather, testing new firearms with local law enforcement or tracking tag-and-release mountain lions with the Utah DNR.

Bill and his wife Joanne are both Air Force Veterans. After 8 years as an Air Force Meteorologist, Bill continued his career in weather as a television meteorologist for 25 years before retiring and taking up the producing and hosting of American Outdoors. For eight years Bill also taught and developed undergraduate curriculum as an Adjunct Professor teaching Marketing and Public Relations, Writing for the Media and Meteorology at Broome Community College in upstate New York.

Bill and his wife, Joanne, have 9 children and 29 grand children.